It's been quite a while since I've posted -- in fact, I had to figure out how to do it again. 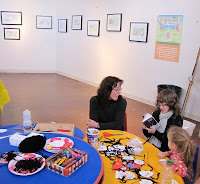 In a nutshell, things have been very busy -- I just finished up my artist-in-residence at the Telus World of Science here in Calgary. The space they gave me was beautiful...

My "thing" was old-fashioned optical devices, so had a zoetrope, flip-books and thaumatropes for visitors to muck around with. 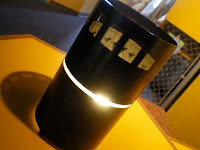 I really thought the zoetrope would get the most attention from kids (and I had nearly 600 of them in a 4 week period), but in fact, it was the thaumatropes that captured their attention. 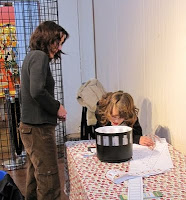 In case you're wondering, a zoetrope looks like this pictured here ... this is the one from the Royal Saskatchewan Science Centre, but mine looked pretty similar (see right-hand pic). I had a local metal worker construct one for me. I think it was an unusual project for him. Here's what mine looked like in action...

Anyway, what was I saying...? Oh, yes-- it was the thaumatropes that the kids really dug. And do you know what they look like? Here's a pic for you... this is an example of a classic thaumatrope... empty 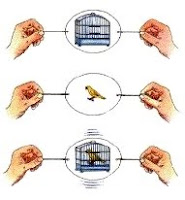 bird cage on one side, bird on the other. Another classic example is the empty fish tank on one side, the fish on t'other.

Here's an example of a thaumatrope I did-- I call it the X-ray boy...
one side (right) is a boy, and on the other, very carefully lined up so that the eyes connect when the thaumatrope is spinning, is the skeleton (left). Especially appropriate at Hallowe'en, which is when I was there.

But back to the zoetrope (note, there should be an umlaut over the first 'e', but I don't know how to do that...)-- I'd had long sheets printed at Staples, that were separated into panels. The rule of thumb is that there should be the same number of panels are there are slits in the zoetrope. 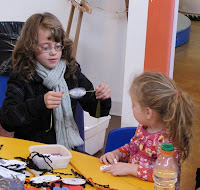 Kids did growing trees and flowers, butterflies flitting over the page, people walking, happy faces turning sour... stuff like that. This was quite successful with the older set -- about 12 - 14 year olds, who had some time to spend.

One other option was creating flipbooks -- to avoid having to carefully bind papers together, I used old paperback novels and had kids draw their images in the lower right hand-corners of the pages. Flips beautifully, and the effect on the pre-existing type is really quite cool. I'll post examples of this one soon.

Many thanks to Linda Hawke for letting me use her great shots from the museum -- much appreciated, Linda!

Well, that's it fer now -- keep your eyes open for "Where Does Your Cat Nap?"