Painting the Pavement Project in Calgary

My introduction to public art happened last summer at a Calgary intersection— and, no, I wasn’t hurt.

The South Calgary Community Association (the SCCA) put forth a proposal to the City of Calgary to conduct a series of Paint-the-Pavement projects, and the City accepted one at the corner of 45th Ave and 15th Street SW, in the neighbourhood of Altadore. I was brought on board by a member of the SCCA’s traffics committee to provide the imagery and direct the painting.

The first step was choosing an image or two—that wasn’t too hard. I knew we wanted to reflect the kid angle of the ‘hood, so a boy and girl image were basic. But what should the characters be doing?

The corner for the project is adjacent to a playground where peewee soccer matches are a regular occurrence, so that decision was easy-- a kid with a soccer ball. The other could simply be exploring her environment. As it happens, the community of Altadore is built on a high water table, and years ago (so I’m told) the area was quite soggy. So, I decided she should be playing in a puddle. 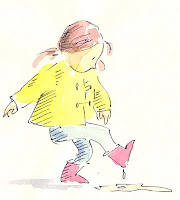 Colours were limited by what could be acquired in road-paint ‘shades’(!), which meant just the primary colours and white. I would need to mix a flesh tone (white, yellow & red), and and brown for the kids’ hair colours… all colours, with a splash of black was my original thinking. However, the day of, a glitch in the paint delivery (no latex black paint, only oil-based) meant I couldn’t add black to the latex mix.

BUT, someone brought in a can of plain old exterior house paint in a dainty shade of dark brown – I suspect this will be the first to wear off next summer… 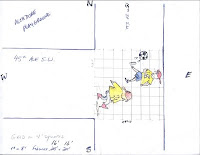 Accurate measurements were take at the site a week or two prior to the event, and I drew up a a scale drawing. Then, I gridded it – the more detailed, the easier the job would be on-site.

About a week before the event, flyers outlining the road closures, and inviting neighbours to participate were circulated homes close to the intersection.

The next step was laying the chalk lines that corresponded to my grid drawing, 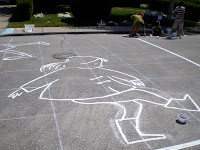 in 3.5 foot squares. This took Dean and me about an hour with a chalk line and tape measure, and then I began to sketch in the two images with a piece of kids’ sidewalk chalk. It was a bit like playing Battleship…

By this time, families were beginning to gather, keen to help out. I gave the adults and older kids skinny paintbrushes, and asked them to outline the characters in white paint -– then younger kids could follow behind with brushes and rollers to fill in the bodies.

By mid-afternoon of that day, we’d laid down about 3 or 4 coats of white, and while we 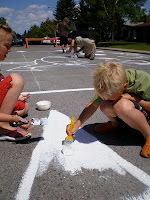 could have started with the colours, we chose to wait. Many local families had planned to join the action on the Sunday, so we decided to leave some work for them.

Sunday was the big paint day – enormous buckets of latex road paints cans were hauled out to the site. We began with one colour— a vat of the most lurid looking yellow paint I’ve ever seen -- which I started by making cut-lines over the white paint.

Then, kids descended with rollers and brushes and immediately filled in all the white space. We laid down 3 – 4 coats, giving all kids a chance to use a brush or a roller. One of our smart volunteers bought a bunch of those 4-inch rollers that were great for kids to handle.

Road paint dries very quickly – within about 8 minutes – and we had revolving buckets of water ready at all times to submerse brushes and rollers. Having a water source – someone’s hose – was critical.

Each colour was brought out one at a time, and we followed the same routine.

When all the colour was laid down in many, many coats, I outlined everything with black lines. Because the black latex still hadn’t arrived, we had to use an oil-based black—it was awful to use and it wa 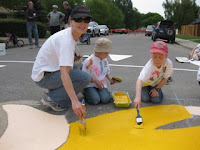 s toxic to breathe in. Kids got shooed away while this activity was underway.

The very final step was the addition of the reflective beads, required by the city. They needed to be added to tacky paint, and because the paint dried so quickly, we designated this to be an adult-only job.

Six months later, the intersection still looks great (though at this very moment, it’s under about 3 feet of snow).

Drop me a note if you have any questions or comments about our Paint the Pavement project.
Email Post
Labels: public art

Leisel said…
Val, this is brilliant. I love your blog. Thank you again for your integral contribution to this project. I believe it was a huge success. I cannot wait 'til spring so we can freshen up your images. You know it is going to happen!

Unknown said…
What a great idea! Calgary definitely needs more community activities for the kids. It's a brilliant idea to turn paving into an artistic medium, too.
December 17, 2012 at 3:00 PM