One of the moms at my daughter's school asked me if I had any arty ideas for a surprise year-end gift for our kids' very special grade 4 teacher.

The teacher (whom I'll call Mrs Clark 'cause that's her name) is a believer in the connectedness of life, and subscribes to the what-comes-around-goes-around principle. She's also the kind of person who'd love a drawing done on the back of a paper serviette just so long as it comes from the heart.

What could be done, we wondered, that would include each of the students, yet not be too taxing on the kids and their families? The work on this project would have to be done on the homefront without Mrs Clark's knowledge.

We settled on a mandala, which in Sanskrit means "essence" and "having or containing," a symbol representing the entire universe, "the self and inner harmony,"as well as translating to "completion." Perrrr-fect!

Creating a mandala required some geometric figuring and cyphering on my part. With 18 kids in the class, and 360 degrees in a circle, each piece of the pie would have to be ... uh, hang on ... 20 degrees per piece.

So, onto 18 separate sheets of Arches 90 lb hot-pressed paper, I drew a 20-degree piece of pie, along with the delineations I wanted the kids to make, and a place for their name (all would have been lost without this step...).

The other mom whom I'll call Charlotte ('cause that's her name), put together a secret little package of info for each kid to take home.

The package included this piece of pie (see right), a description of the project and what a mandala is, instructions to keep it SECRET, and an example of how they might colour their pie of the mandala (see below).

The toughest job was actually collecting the work from the kids without Mrs Clark knowing what was going on. This meant chasing kids down in the playground, e-mailing parents, peering into grubby backpacks, re-doing 20-degree pie pieces to no end, secret meetings, all in an effort to get the goods for the final piecing together of the mandala.

Once I had all the pieces collected, I used a larger piece of the Arches 90 lb paper, and glued them down to it 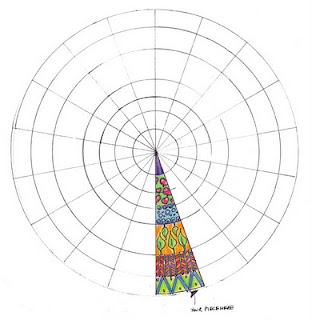 , initially with a glue-stick. Then, I painted the entire surface with Modge Podge, being careful with the kids' art that was done in felt marker (for future reference, ask the kids to use only pencil crayon, no felts).

Then, it was off to the framers' who cut a matte that overlapped the circumference of the mandala by a spare 1/16 of a inch. I chose a bright white matte and a simple black frame. To the back of the framed mandala, we attached a legend so Mrs Clark could see which mandala piece belongs to which student (hence the usefulness of keeping kids and pie pieces straight from the get-go).

The result is, well, pretty spectacular... or at least, we think so... 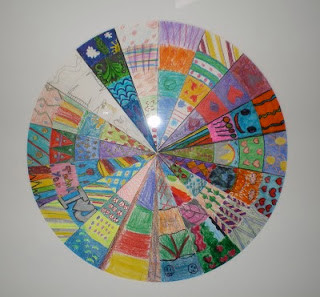