I've recently spent some time getting to know the Canada Goose... see what I mean?

Let me back up... Regina's beautiful urban park, known as Wascana Park, is about to turn 50-years old this summer, so in celebration of this landmark, author Jean Freeman decided to write a children's book about the park.

The main characters of the story are Lucy and Alexander, a pair of Canada gooses, er, I mean geese who've made Wascana Park their home. The two of them pass through the seasons of the park, moving to various well-known venues around the lake, often just missing one another. This is where the title Wascana Wild Goose Chase! comes in.

Illustratively, I was able to incorporate not only all the beautiful greenery and landscaping, but some of the interesting architecture of the surrounding buildings, starting with the Saskatchewan legislature. This gorgeous building was completed in 1912 and very nearly didn't make it past its first year. The infamous Regina cyclone just barely spared the new building in the summer of 1912, carving a path right around its periphery. Anyway, I digress...

In addition to the pictures and Jean's rhyming story line, she's also included on each page a series of stamps, in which she provides interesting tidbits about the scene, such as where the name "Wascana" came from, why the city was referred to "pile o' bones," where did the Queen's favourite horse come from, and more goodies of this nature.

I had a lot fun recalling my youth in Wascana Park, especially hanging out at Wascana Pool.... here's just a snippet of the pool illustration that appears in Wascana Wild Goose Chase... 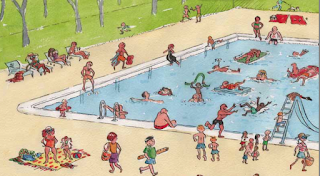 The illustration that took the most time is, happily, also the one that made it to the cover... here it is, complete with Jean's stamps...  talk to you later!

PS... can you find Lucy in the above picture?