Another great Saturday spent with a couple of excited groups of Grades 4s and 5s, this time in High River, Alberta. The Foothills Young Authors' Conference is held annually at this time of year, and they always snag great keynote speakers. Thanks to all the organizers and sponsors of this event-- all the kids I talked to had a great time.

Kenneth Oppel came out from Toronto to attend this year's FYAC, and the line-up of kids wanting his autograph snaked back and forth around Centre Court at Highwood High School about half a dozen times. Some of the other great presenters I got a chance to rub shoulders with were Simon Rose, Hazel Hutchins, illustrator Derek Mah, BC writer John Wilson, Valerie Walker, Mar'ce Merrell, Donna MacNaughton and Jacqueline Guest.

My session was called The Art of the Picture Book, where I discussed how to tackle the job of illustrating a story-- the editing process, breaking copy into pages, pacing, page formatting, text placement, cover design, character consistency... all that good kind of stuff. 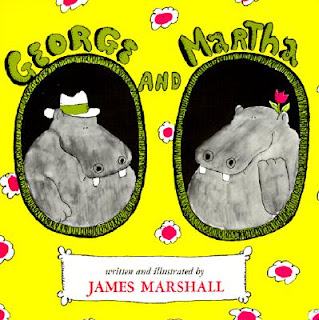 e kids' hands-on exercise was to illustrate a page based on copy borrowed from a scene in James Marshall's George and Martha (remember the one where George pours Martha's split-pea soup into his loafers?).

I put the copy up on the Smartboard, and let them go at it, reminding them that they had to plan for where the copy would sit on the page.

After they'd completed their illustrations, we compared and contrasted them with their classmates, and discussed their rationales. Most depicted George and Martha as humans, but there were also some aliens, dogs and amphibians.

I then showed them how Marshall had in fact depicted this scene, and since most kids (okay, none) weren't familiar with the story, none knew how he'd done it.

And none of them knew that the couple were hippos. Surprise!