Interview with Jean Freeman, author of my latest book, “Where Does Your Cat Nap?” 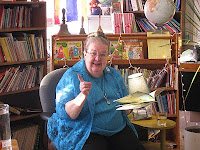 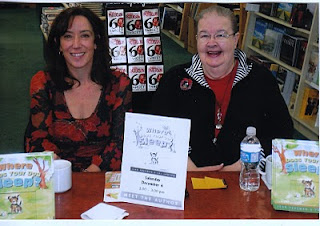 Q. Your latest book, “Where Does Your Cat Nap?” (WDYCN) has just come out. Can you tell us a little about it?
A. Some people have referred to it as a “sequel” to "Where Does Your Dog Sleep?", but WDYCN is actually a response to the many, many cat- lovers who demanded equal attention for their favorite pets, after we did “WDYDS?”
Because I’m a word person, the book was also inspired by the image conjured up by the term “cat nap”. (The rhymes in the cat book also spurred me to think about images like a n armadillo on a pillow, or a baboon on the moon, but those haven’t led to anything concrete. At least not yet!)

Q. Were you inspired by a particular cat? Or just the species in general?

A. The cats in the book were actually the brain children of my brilliant illustrator! My only direction, re: physical appearance, was that there should be many cats of many different kinds, rather than just one cat. I figured that way we could take some positive steps toward appeasing cat-lovers who wanted their pets to be in a book, and in fact it is working out that way. Book-buyers are saying “oh, the cat in the pot looks just like my Fluffy,” or “our cat is exactly like the one on the piano!”

The only complaints/regrets I get are that there are no black cats! I patiently explain that black cats are very difficult to draw with expression and character, so the grey cat on the fence is as close as we could come. (I’ve actually received the same comment about the dog book -- there are obviously a lot of black terriers out there who look exactly like the little dog -- except for the color!)

A. I love them! (And I’d better, since my best friend is a cat person, and she insists that her friends should love cats too!!) When I was a teenager, we had a cat who liked to run up and down the keys on the piano while the family was sleeping, making strange Music In The Night -- and also loved to sit on my chest while I was asleep, to check out the strange noises I made. Many mornings I woke up with a furry paw investigating my open mouth!!

(For the record, I love dogs and horses too! I’m working on loving hamsters, since my granddaughter Tina is now a proud hamster owner!) 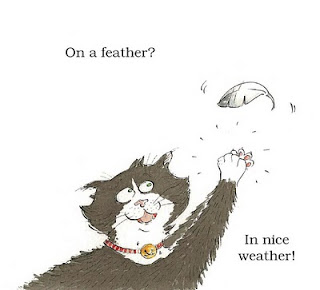 Q. Jean, you’re not just an author but an actress, too… what sort of acting gigs have you had?

A. I’ve always been a story-teller, which is what actors and writers do. I started out, as most people do, as a very small child, playing “make believe” with playmates. I quickly branched out into directing -- “You’ll be the mommy, and you put the baby in the dishpan for a bath, and you’re the daddy with glasses on and you put the dishes in on top of the baby because you can’t see him ....”

My first “starring role” in “legitimate -- sort of” theatre was as Mrs. Santa Claus in Grade Two. A fund-raiser for Jr. Red Cross! In later life, I wrote / directed / performed in shows for Little Theatre groups, church groups, High School, and youth groups.

In my “real life”, I worked in Radio and TV as a writer and producer, which led to on-air work and the opportunity to audition for some of the early movie production in Saskatchewan. “One-off” acting opportunities included roles in “Sleepwalking,” “The Greening of Ian Elliot,” “The Dinosaur Hunter,” “Painted Angels” and “Conquest” (You have to be careful about this title, however: there’s also a XXXX-rated ‘Conquest’ in the DVD stores. That’s not the one I was in!)

TV work included roles on “Incredible Story Studio,” “Mythquest,” a couple of scenes on “Little Mosque on the Prairies,” and 26 episodes of “Corner Gas,” where I played the mayor’s granny. I also do voice over work for commercials, documentaries and (I hope!) audiobooks.

I’ve written and directed many stage productions, but two favorites are probably the one created for Regina’s 90th anniversary, “Regina Revisited: or What’s a Nice City Like You Doing in a Place Like This?” and “Azoy Geht es” (“That’s the Way It Goes”) for Beth Jacob Synagogue, to celebrate 100 years of Jewish presence in Saskatchewan.

I’m currently sitting on several film scripts that I’m trying to pitch to producers -- “The Yellow Rose Bush” (a romance of prairie pioneer days), “The Curse of the Idle Eye” (a family comedy set in 1930s Saskatchewan)

Q. You and your illustrator (okay, that’s me we're talking about here…) have worked on two children’s books in the past two years, and you live in different cities – do you think this presents a challenge?

A. It’s worked remarkably well for me (and I hope for my illustrator too.) We know each other personally and correspond clearly and frequently by email. If we ever had a glitch that couldn’t be explained online, we would probably meet in person and thrash it out, but I can’t at the moment imagine what that might be.

The third part of the troika is our publisher, Heather Nickel of Your Nickel’s Worth Publishing. She is located in Regina, but works comfortably and competently with both Val and me via email. We three do meet in person from time to time, but mostly for fun and friendship. I’m sure that this “distance operation” wouldn’t work for everyone, but it is certainly working well for us. I can’t imagine two other people (experts in their fields) with whom I’d rather be doing this!!

Q Are you working on any new books right now?

A.I have a “pre-tweens” adventure book that I wrote before the picture books were ever dreamt of. It’s been sitting around for more than three decades (well, I wrote it for my kids when they were little!) and I’d like to have it see the light of day! It’s not a book that will have illustrations.

However, I do also have a couple of picture books in the mill -- “Do Trees Sneeze?” (written for my granddaughter -- one of the “Question” series, I guess!) and “I Can Make a Story” (not written yet. But I’m working on it!) (I’m actually also working on a “real” “grown-up” book, “Dear Diary! It’s Me Again!” But that’s a whole other story!!)

People ask how many books I plan to publish. My answer is always “I’ll keep on until I run out of money!” As a self-publishing author (even aided by the expertise of editor/publisher Heather) it’s not a money-making undertaking. Just breaking even is a major accomplishment for self-publishers! But how else could I have so much fun, and meet so many delightful people, old and young, doing something I love doing that’s not illegal, immoral or fattening?

Q. Thanks so much for taking the time to chat, Jean!

A. And thanks for asking me!
Email Post
Labels: Author -- Jean Freeman Children's Author Interview Self-publishing

Unknown said…
This is a very rich interview, and full of encouraging words. Thanks so much!
January 8, 2010 at 7:00 AM